During the course of COP26, the Mo Ibrahim Foundation has published a series of research spotlights focusing on COP26 and Africa. Our first spotlight examined the link between climate change, hunger and food insecurity, while the second focussed on energy justice on the continent. This third and final spotlight examines African perspectives on climate change, as well as what African negotiators want from COP26.

COP26 aims to  implement the 2015 Paris Agreement’s critical goal of limiting global warming to 1.5 degrees Celsius above pre-industrial levels by reducing global greenhouse gas (GHG) emissions to net zero by 2050. The threat is enormous: if no action is taken now, the global temperature is on track to rise by a devastating 2.7 degrees Celsius by the end of the century. For African countries, the stakes could not be higher. African countries are some of the lowest polluters in the world - in 2018, 16.7% of the world’s population lived in Africa but the continent accounted for just 6.9% of global GHG emissions – yet they pay the highest cost. African countries face the dual challenge of cutting down emissions while industrialising and recovering from the severe economic impact of COVID-19. They are also the most vulnerable to climate change: by 2030, nearly 120 million extremely poor people in Africa will be exposed to drought, floods and intense heat, hindering progress on poverty alleviation and economic growth.

Top priorities for Africa at COP26

The African Union’s Agenda 2063, the master plan for transforming Africa into a global powerhouse of the future, recognises climate variability and climate change among the main challenges threatening the continent’s goals. The First Ten-Year Implementation Plan for Agenda 2063‘s Goal Seven aims for a sustainable climate and resilient economies and communities across the continent.

The continent spoke with one voice during the COP26 negotiations, with the African Group of Negotiators on Climate Change (AGN) representing the unified position of 54 African countries. According to Tanguy Gahouma-Bekale, AGN’s chair, the COP26 goal on climate finance needs to be $700 billion per year. Against this backdrop, only 79 billion dollars were mobilised by the biggest polluters to vulnerable countries in 2020, far short of the 100 billion dollars per year until 2025 that was agreed at the COP15.

Due to their very small carbon footprint, clearly African states should not have to allocate the same share of their GDP towards climate initiatives as their developed counterparts. “We are not developed countries; we cannot use this money because this money is for development – it’s for food, it’s for education, it’s for a lot of things – not to fight against a situation that we are not responsible for,” explained Gahouma-Bekale.

According to the Institute for Economics & Peace (IEP), of the 39 African countries surveyed in 2019 in the Lloyd’s Register Foundation World Risk Poll, the highest level of climate change concern was registered in Southern African countries. Those having the highest percentage of their population worried about climate change were Lesotho (77.9%) and Malawi (74.6%), the sixth and ninth most concerned countries respectively globally, followed by Eswatini (69.6%), Namibia (65.3%) and Zambia (64.4%).

Of the five African countries showing the lowest level of climate change concern, four were Northern African: Egypt (17.6%), Libya (24.4%), Algeria (25.4%) and Tunisia (31.6%). Ethiopia, the second most populous country on the continent, registered the second lowest level of concern of the 142 countries polled globally, with merely 17.5% of its population being concerned about climate change. 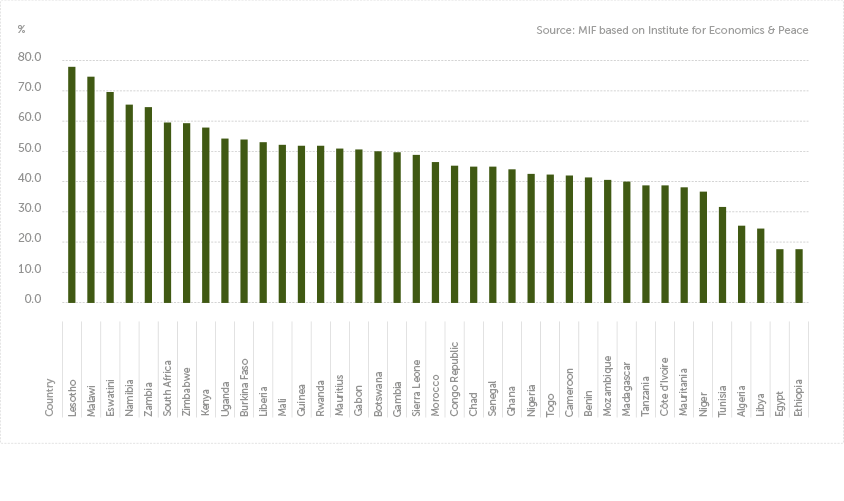 According to the latest Afrobarometer survey conducted in February-March 2021 in Tanzania, only about one-third (35%) of Tanzanians said they have heard of climate change, a modest increase compared to in 2017 (31%). Awareness of climate change is highest among citizens with post-secondary education (76%) and regular internet users (64%), and particularly low among women (29%), rural residents (229%), and people who work in the agricultural sector (29%).

Among citizens who have heard of climate change, almost two-thirds (63%) say it is making life in the country worse. Concern about climate change is particularly common among men (68%), older people (70% of those over age 55), those with post-secondary education (68%), and those who work in the agricultural sector (66%).

Globally, IEP has found that some of the most significant carbon emitters globally are countries where citizens are least concerned about climate change as a very serious threat. None of the four greatest carbon emitting countries (China, United States, India and Russia) were among the 68 countries where a majority of citizens felt that climate change posed a “very serious threat” to their country in the next 20 years.

Africa must be at the heart of climate negotiations

Without putting the most vulnerable at the centre, climate negotiations cannot succeed. However, reports that COP26 is the "whitest and most privileged" ever, with thousands from poorer countries who had planned to attend excluded, are discouraging.

COP27 is due to be held in Africa at the end of 2022, but Africa’s priorities must be at the centre of this COP26 agreement and not postponed any further. 2022 may be too late.