Spotlight 17: Africa’s vast green potential should not be limited to renewable energy

Africa’s population is likely to double by 2050. Its energy consumption is set to surpass the European Union’s around the same time. As such, Africa’s development trajectory is central to global ambitions for a green and sustainable future. The continent’s energy consumption should be a major question for leaders at COP26. However, in a continent where many countries remain energy poor, combatting the climate crisis should be viewed in a holistic way and not exclusively through the narrow lens of investing in renewable energies such as wind and solar. Striking a balance is key. African countries have vast potential to build thriving green economies beyond the renewable energy sector. International climate financing should support these objectives, while lower emission transitional fuels that can work in tandem with renewable energies should not be taken off the table.

No other continent in history has been tasked with the challenge of developing without polluting, whilst being simultaneously the major victim and the lowest contributor to emissions.

African countries are the lowest polluters and have lowest energy access

African countries contributed the least to climate change, but many are among those countries that suffer the most from its consequences. In 2018 (the latest year for which there is data), the entire continent contributed 6.9% of total global greenhouse gas emissions, despite making up 16.7% of the world’s populations. In the same year, the United States’ greenhouse gas emissions were nearly twice as high, despite only accounting for 4.3% of the global population.

The African continent’s contribution to global emissions is far less than its share of the world population. 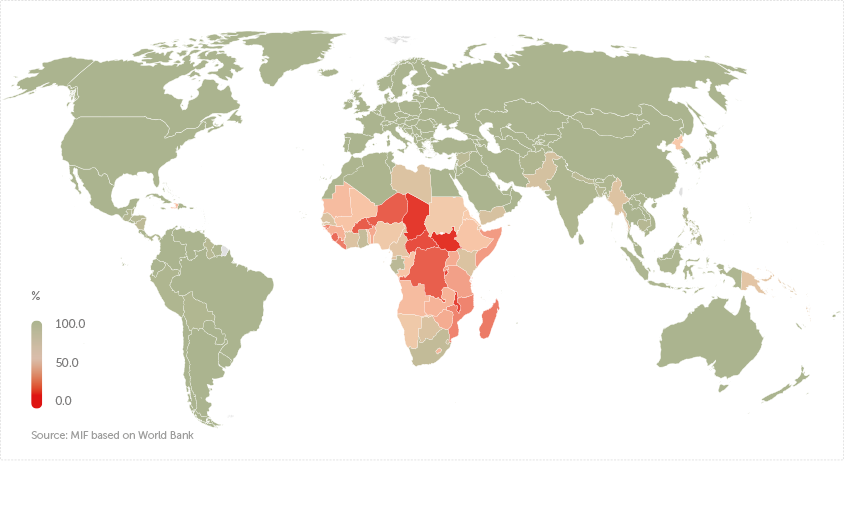 In recent years, international donors have focussed overwhelmingly on investing in renewable energies in Africa. While the continent has vast potential in renewables such as hydro, solar and wind, such a ‘one size fits all’ approach does not reflect an energy landscape that varies greatly between countries. A country like Ethiopia, endowed with vast hydro and geothermal resources, has much greater potential to utilise green technologies in the short-term, compared to a country such as Nigeria, which is heavily dependent on oil and gas. Exclusively pushing renewables across the continent will leave many with unreliable and expensive power.

Cleaner non-renewables, such as gas and nuclear, or less polluting renewables such as biomass, could provide a solution. But instead, many donors from the global north are focussing on solar and wind. The UK and US have already pledged to halt overseas investment in fossil fuels including lower emission fuels such as gas. This week at COP26 more than 20 countries and financial institutions including the European Investment Bank made the same commitment.   This pits the global effort to combat climate change against African countries’ own efforts to combat poverty and industrialise. This approach could even be counterintuitive, as it pushes energy poor countries towards cheaper, higher polluting fuels such as  charcoal, coal and oil.

This does not mean that going green and achieving the continent’s development goals are mutually exclusive. Many African countries have the potential to build thriving green economies beyond renewables, which could support climate change mitigation and adaptation. Crucially, this could also create jobs for the continent’s growing youth population and rejuvenate economies impacted by the pandemic.

Agriculture is an area of promise. Evidence from a UNDP study in Zimbabwe shows that up to 30,000 jobs were created for every one million dollars invested in conservation agriculture. This is a climate resistant form of agriculture that can help mitigate the continent’s food security crisis, while capturing carbon from the atmosphere. Globally, the practice has the potential to sequester up to 372 million tonnes of carbon dioxide from the atmosphere per year. In contrast, the same UNDP study showed only 25 jobs were created for each one million dollars invested in commercial solar.

Forestry activities, including conservation and reforestation, can also be a job creator and a vital tool for carbon capture. Nigeria’s reforestation drive is projected to create 20,000 jobs and capture 565,000 tonnes of carbon per year. Gabon plans to combine conservation of its stretch of the Congo Basin Rainforest, which alone sequesters roughly 140 million tonnes of carbon per year, with a high value eco-tourism sector. This follows the successful examples set by Uganda and Rwanda.

Even increased efficiency in sectors not traditionally considered as green can reduce emissions, while also creating increased economic activity. Evidence suggests that productive investment into areas such iron, steel and cement could do just that.

The financing is out there

With an estimated $10 trillion in ESG (Environmental, Social and Governance) capital currently looking for a return, there is a unique opportunity for the continent to grow green African financial markets. Efforts are already underway, with the African Union launching a Green Recovery Action Plan to boost the recovery and support key sectors such as conservation and biodiversity. The new IMF Resilience and Sustainability Fund for SDR redistribution is also likely to support green agendas.

COP26 must look at the big picture

It is essential at COP26 that climate financing in Africa is viewed holistically. Existing international funding commitments, which to date have fallen short, must be realised and scaled up. They should also be diversified, and this means looking more widely than investment in renewables. Financing should be made available for carbon capture sectors such as conservation agriculture and reforestation. Furthermore, lower-emission energy sources, even non-renewables, must be part of a climate-transition. If Africa’s energy deficit is to be addressed, biofuels, gas and nuclear will need to share a stage with hydro, wind and solar in the medium term. Only a holistic view can simultaneously achieve climate and energy justice on the continent.

In half of African countries, less than half the population have access to electricity.