Spotlight 14: COVID-19 vaccine donations to Africa: increase the pledges and speed up delivery

According to data collected by Bloomberg, more than 6.5 billion COVID-19 vaccine doses have been administered across 184 countries as of 10 October 2021. This is the biggest vaccination campaign in history – enough doses have now been administered to fully vaccinate 42.3% of the global population – but disparities in access are still stark. On average, the countries and regions with the highest incomes are getting vaccinated more than 20 times faster than those with the lowest.

As of 11 October 2021, African countries account for only 2.5% of the COVID-19 vaccine doses administered globally, despite being home to nearly 18% of the world’s population. 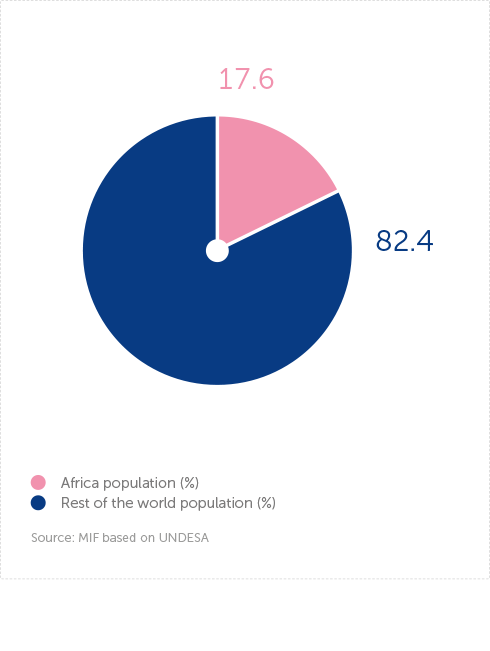 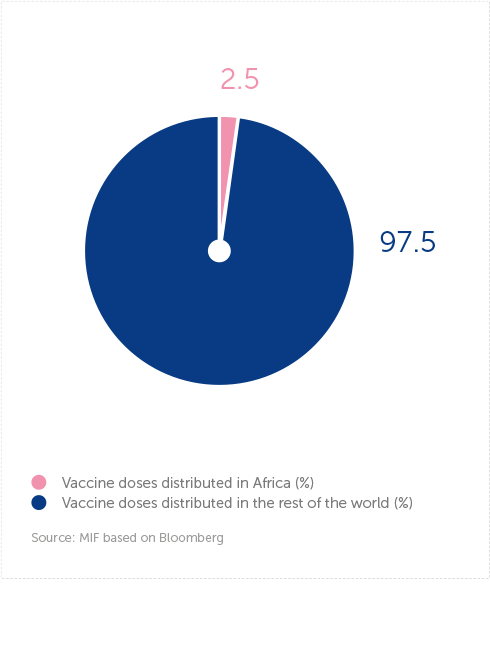 As a result, only 15 African countries met a WHO target of vaccinating 10% of their population by the end of September (Seychelles, Mauritius, Morocco, Tunisia, Cabo Verde, Comoros, Eswatini, Lesotho, Zimbabwe, Botswana, South Africa, Rwanda, Mauritania, Equatorial Guinea and São Tomé and Príncipe).

As highlighted in the latest update of MIF’s COVID-19 in Africa tracker, two African countries, Burundi and Eritrea, have not even started their COVID-19 vaccination campaigns. This shows how difficult it will be for every African country to meet the end-of-year target of vaccinating at least 40% of its population.

As emphasised by Dr Nkengasong, Director of the Africa Centres for Disease Control and Prevention (AfCDC) during the 2021 Ibrahim Governance Weekend, African countries need vaccines at speed and scale. Any excess doses in wealthy countries should be redistributed immediately, otherwise, the risk of endemicity of the COVID-19 virus in Africa is high.

According to UN Secretary-General António Guterres, the scientific triumph of COVID-19 vaccines has been undone by the combination of a lack of political will, selfishness and mistrust. Speaking at the General Assembly in September, he said: “This is a moral indictment of the state of our world. It is an obscenity. We passed the science test. But we are getting an F in Ethics.”

The 2021 Ibrahim Forum Report, assessing the impact of COVID-19 in Africa one year on, highlighted that a rise in vaccine nationalism has come about where most high-income countries are hoarding as many vaccine doses as possible and appear reluctant to share with others until inoculation against the virus is complete in their own country.

Since wealthy countries have purchased far more doses than they need, dose donations have become increasingly important for vaccine equity. In June this year, the Group of Seven (G7) major economies  announced a plan to donate a billion COVID-19 vaccine doses. More recently, during a global virtual summit held on 22 September, the United States promised to buy an additional 500 million COVID-19 vaccine doses to donate to other countries, bringing the total pledged by the US to more than 1.1. billion doses.

According to data collected by the Duke Global Health Innovation Center’s Launch and Scale Speedometer, as of 8 October 2021, the total vaccine donation pledges made directly to Africa, both to individual countries and the African Union, amount to 130.1 million vaccine doses.

However, this figure does not include the pledges made to COVAX, the global vaccine-sharing scheme. As of 8 October 2021, these amount to 944.7 million vaccine doses, from which the African continent is expected to receive a large chunk.

Even though these vaccine pledges may seem hefty, they still fall well short of the 5 billion to 6 billion doses global health experts say are needed by poorer countries. In order for Africa to reach its ultimate goal of a 60% to 70% vaccination rate, the continent  would need at least 1.6 billion doses, according to the AfCDC.

On top of this, wealthy countries have so far only delivered a very small fraction of the doses that they promised to share with the rest of the world. For instance, as of 30 September 2021, European Union (EU) countries have only shipped around 44 million doses (9%) of the 500 million that they pledged.

The latest supply forecast for COVAX suggests that accelerating vaccination in low-income countries looks unlikely. It estimates that a total of approximately 1.4 billion vaccine doses will be distributed through COVAX by the end of 2021. This is significantly lower than the 2 billion doses that it was aiming for earlier this year.

However, taking into account that only 280.5 million COVID-19 vaccine doses have been given out through COVAX as of 15 September 2021 – less than 5% of all the vaccines administered globally – there is also doubt that COVAX will be able to meet its new lower 2021 delivery target.

G20 needs to scale up ambition

According to data collected by the Launch and Scale Speedometer, as of 8 October 2021, Group of Twenty (G20) members have pledged to donate nearly 1.97 billion COVID-19 vaccine doses. However, the doses shipped so far only amount to 16.3% (321.8 million) of their total pledge. 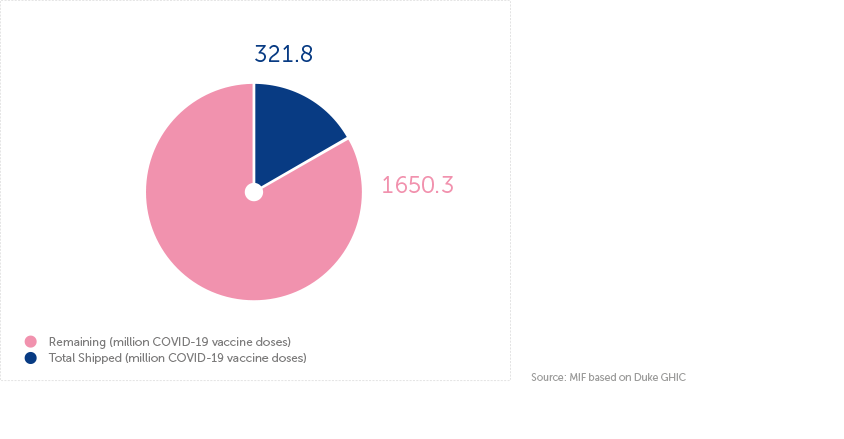 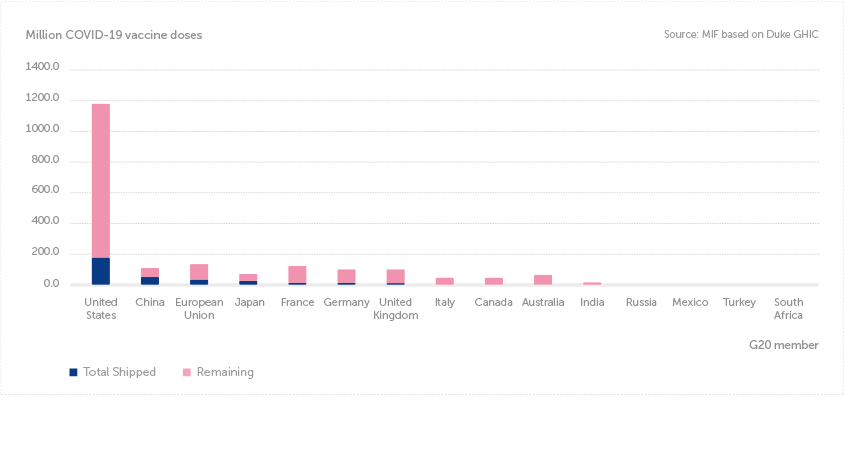 As G20 leaders converge in Rome for the conclusion of the Italian presidency at the end of this month, it is essential that they not only increase their future pledges but also speed up the delivery of their current pledges. Any other outcome would be unacceptable, and would pave the way for the emergence of more deadly or contagious variants, placing everyone at risk irrespective of national borders.