Dr Songwe is Executive Secretary of the Economic Commission for Africa, and an Ibrahim Index of African Governance (IIAG) Advisory Council member.

Rule of Law, Transparency & Accountability are key to improving public governance in Africa

The opinions expressed in this article are solely those of the author, and do not necessarily reflect the opinions or views of the Mo Ibrahim Foundation.

Africa will not be able to seize the transformation opportunities often highlighted by regional and global development frameworks if governance shortcomings persist. Although it is difficult to measure precisely good governance and its costs, there are tools such as the Ibrahim Index of African Governance (IIAG) that provide useful indices and analysis to enable assessments of how well countries are doing in addressing shortcomings. The IIAG measures governance performance both holistically through the composite measure of Overall Governance, and through specific indicators covering a variety of topics.

The IIAG sub-category Rule of Law assesses the extent to which states have effective methods of adjudicating disputes of all kinds, and enforce laws through judicial mechanism free of state control. The Transparency & Accountability sub-category on the other hand measures the degree to which public officials, institutions and the private sector are subject to oversight and scrutiny by other institutions and citizens, in order to make governments responsive and pursuing the public interest. 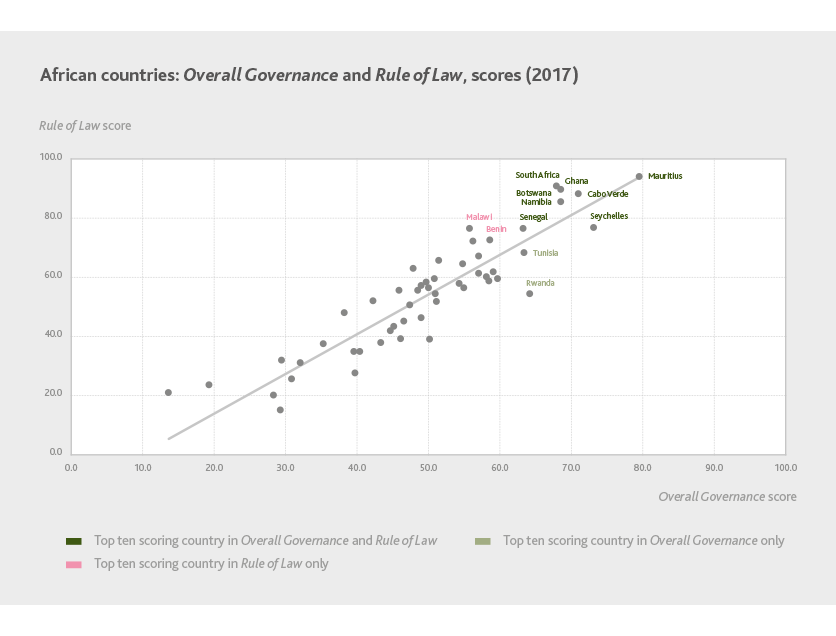 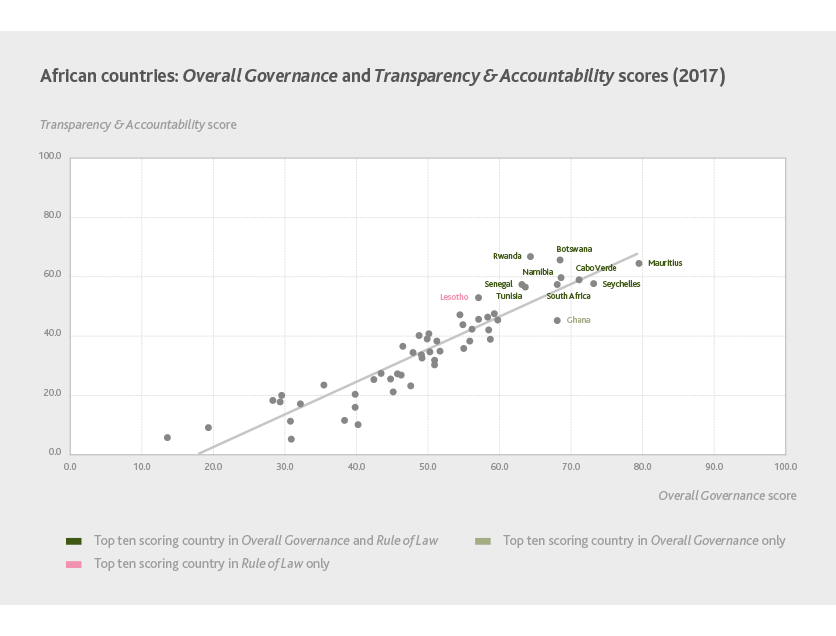 The recent progress in this pillar of governance is encouraging. Having reached its lowest score in the last decade in 2013, the African average score for Rule of Law has since then shown continuous improvement. As a result, the score of 53.9 in 2017 is the sub-category's highest performance in the last 10 years. All underlying Rule of Law indicators improved between 2013 and 2017.

Whilst only 24 countries show improvement in Rule of Law over the last 10 years, in total 30 countries, home to more than two thirds of the African population (71.1%), have seen improved Rule of Law between 2013 and 2017.

African average performance in Transparency & Accountability has also seen a recovery after a period of deterioration until 2014. Despite the recovery, the African average score in 2017 (35.3) is only the same as in 2008 and remains Africa’s worst performing sub-category of the 14 in the IIAG. Six of the nine constituent indicators are among Africa’s 20 lowest scoring indicators of the 102 in the IIAG. Despite some very low scores, African average scores in underlying indicators for Transparency & Accountability have improved, especially over the last five years. Between 2013-2017 indicators measuring transparency – such as Access to Records of State-owned Companies (+4.6) and Access to Public & Legislative Information (+3.9) – are the most improved in the sub-category. The former remains, however, the second lowest scoring indicator in the IIAG on average (17.1 in 2017). As more access to information is expected to enhance accountability and reduce corruption, improvements in these measures are positive but much more needs to be done to attain higher scores. 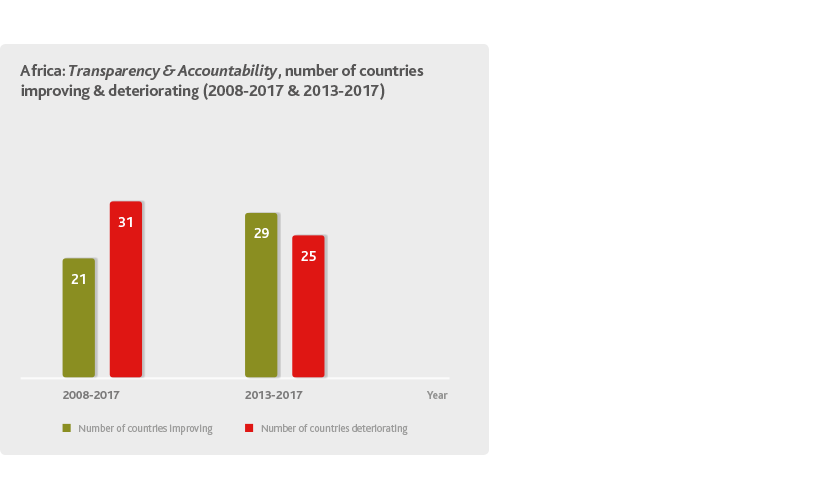 Nevertheless, whilst the majority of countries deteriorated over the decade in this sub-category of the IIAG, things have shifted in the last five years. 29 countries have improved their score in this sub-indicator during this time period and 25 countries have declined. 11 countries that have shown a decline before are showing progress in the last five years. This even includes four of the bottom 10 scoring countries: Sudan (+1.1), Democratic Republic of Congo (+1.0), South Sudan (+0.5), and Guinea-Bissau (+0.2). Improvements for the majority of countries in this period mean that almost ¾ of African citizens (74.5%) have experienced better Transparency & Accountability over the last five years.

More must be done to improve Transparency & Accountability across the continent. The #HonestService campaign spearheaded by the Economic Commission for Africa (ECA) will contribute to increasing citizen participation, thus helping to strengthen Transparency and Accountability on the continent. We must ensure we continue to use tools such as these to keep track of our continent’s performance in this key issue and work towards initiatives that provide an alternative approach to the corruption narrative on Africa.

Safety and Rule of Law and Sustainable Economic Opportunity: a strong correlation

Mo Ibrahim: a stronger IIAG to assess governance in Africa

Africa’s job market: what are the challenges?