On Monday 3 October, the Mo Ibrahim Foundation launched the 2016 Ibrahim Index of African Governance (IIAG). This was the tenth iteration of the IIAG, launched in the ten-year anniversary of the Foundation and in this context, we focused on analysing a decade’s worth of data on African governance from 2006-2015.

Since the launch, the 2016 IIAG has been widely reported as the most comprehensive analysis of African governance undertaken to date, and it certainly is. To construct the 2016 IIAG, the Foundation’s research team collected 166 variables that measure governance concepts from 34 sources. These have been combined to form 95 indicators, 14 sub-categories, 4 categories, and one Overall Governance score. In total, there are 237 different measures of governance in Africa in the 2016 IIAG. These measures cover 54 African countries, with 16 years of data from 2000-2015 inclusive.

This construction method provides vast amounts of data, and it’s therefore vital that users of the Index take into account performance across the different governance concepts in the IIAG. Scores, ranks and trends are available for all 54 countries at all levels of the IIAG (categories, sub-categories and indicators).

Africa is of course, not a country and the results vary across the continent. In 2015, there is a range of almost 70.0 score points between the highest and lowest scoring country and diverging trends are seen at all levels of the Index.

Key findings of this year’s Index 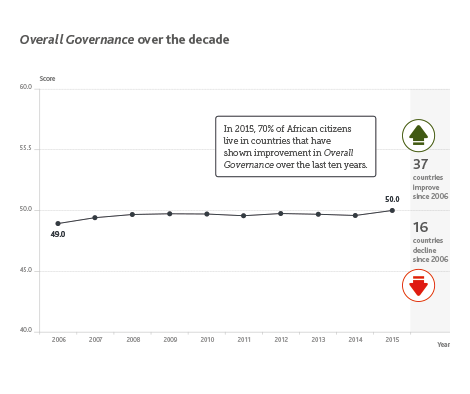 This average progress is driven by positive results in three of the four underlying categories of the IIAG that make up the Overall Governance score. In order of magnitude, Human Development (+2.9), Participation & Human Rights (+2.4) and Sustainable Economic Opportunity (+1.8) all showed average progress since 2006. There has thus been progress, and it is progress for a majority of African citizens. An increase of one score point at the continental average, however, is not much. As Mo Ibrahim stated at our launch, “we can do better than that”.

Safety & Rule of Law has held back further governance progress

“The slow progress upsets me. We can do better than that” – Mo Ibrahim

Six of the ten indicators that have shown the largest continental average deteriorations over the past decade sit in this category: Government Involvement in Armed Conflict (-18.2), Safety of the Person (-15.9), Violence by Non-state Actors (-12.6), Human Trafficking (-10.6), Corruption & Bureaucracy (-8.7) and Social Unrest (-7.3). 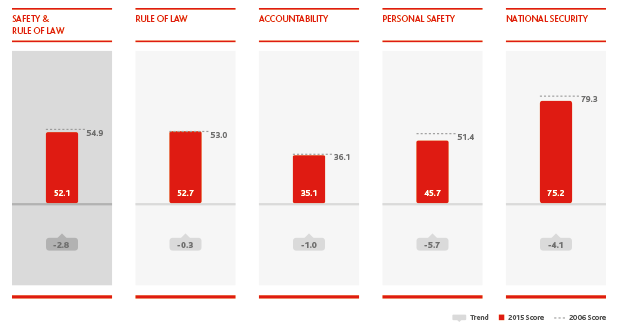 Sustainable Economic Opportunity has seen the most varied results of the four categories in the IIAG. Overall, the trend is positive: the category shows an average improvement of +1.8 score points with 38 countries increasing their score over the decade. This is equivalent to 70% of African citizens.

The African average score however, remains low at 43.9 out of 100.0. Sub-category scores of Sustainable Economic Opportunity are also low. Infrastructure, for example, is the second lowest scoring sub-category in 2015 (39.1). It does, however, exhibit the largest improvement (+6.5), driven primarily by a massive improvement in the indicator Digital & IT Infrastructure (+23.6), the most improved of all 95 indicators in the IIAG.

Exploring the indicators that make up this sub-category further reveals a particularly worrying decline in the indicator Electricity Infrastructure (-0.4). Energy remains a key issue on the continent. Decline in this indicator is seen in 19 countries, home to 40% of Africa’s population.

Looking at the rest of the underlying scores in Sustainable Economic Opportunity, the Rural Sector sub-category has also improved (+2.6) but deteriorations are seen in Public Management (-1.1) and Business Environment (-0.8). The former contains the continent’s lowest scoring indicator in the IIAG, Diversification (9.7) and the latter the most deteriorated indicator over ten years, Soundness of Banks (-21.5). 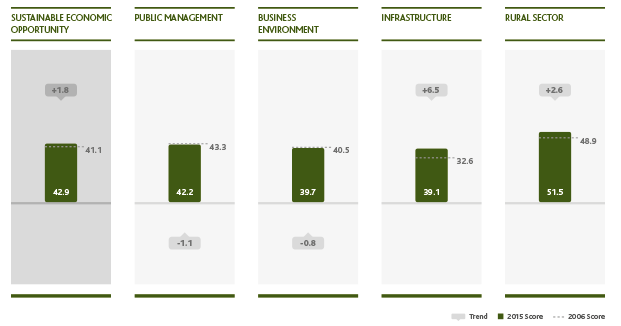 Participation & Human Rights: progress in Gender and Participation, some worrying trends in Rights

37 countries improved in the last ten years in Participation & Human Rights, with the average continental trend in this category showing improvement by +2.4 score points since 2006. 78% of African citizens live in a country that has improved in this governance dimension over the decade. Seventeen countries have progressed across all three sub-categories of Participation & Human Rights, although the majority of these feature in the bottom half of the category rankings (Algeria, Angola, Chad, Djibouti, Gabon, Guinea-Bissau, Rwanda, Somalia, Togo and Zimbabwe). Interestingly, seven countries, who have kept the same head of state for the past ten years, have registered decline in this category: Burundi (-0.3), Cameroon (-2.4), Democratic Republic of Congo (-0.5), Eritrea (-4.5), Gambia (-11.8), Lesotho (-0.1) and Swaziland (-4.5).

The average progress in Participation & Human Rights is driven by improvement in the sub-categories Gender (+4.3) and Participation (+3.0). A marginal deterioration, however, appears in the Rights dimension (-0.2).

Driving the negative trend in Rights, four of the five underlying indicators have shown, on average, some worrying deteriorations since 2006: Civil Liberties (-5.1), Freedom of Association & Assembly (-4.4), Human Rights Violations (-4.3) and Freedom of Expression (-2.7). 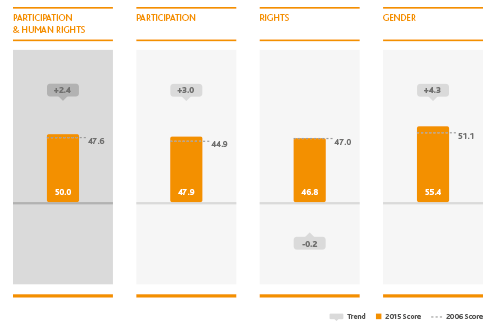 Human Development, the best scoring and most improved category of the IIAG

Africa has certainly shown progress in Human Development. 43 countries, home to 87% of African citizens, registered progress. All of the dimensions that make up the Human Development score – Education (+4.2), Health (+2.2) and Welfare (+2.1) – have improved.

There are some very positive stories exhibited in the Human Development category. Looking at continental average scores, five of the top ten highest scoring indicators in the IIAG are from the Health sub-category (Maternal Mortality, Disease, Immunisation, Undernourishment and Child Mortality). In the indicator Child Mortality, every country on the continent shows improvement, making this the third most improved indicator in the entire IIAG.

Welfare’s improvement is also notable, with a positive improvement in the Poverty indicator (+7.2), however further progress has been affected by declines in the Social Exclusion (-2.1) and Poverty Reduction Priorities (-1.3) indicators.

In the Education sub-category, there has been progress particularly in the indicators Secondary School Enrolment (+9.8) and Primary School Completion (+8.9). This progress has to be tempered with quite a large deterioration in the indicator Education Provision (-12.4), which assesses the extent to which the public are satisfied with how the government is handling addressing educational needs. 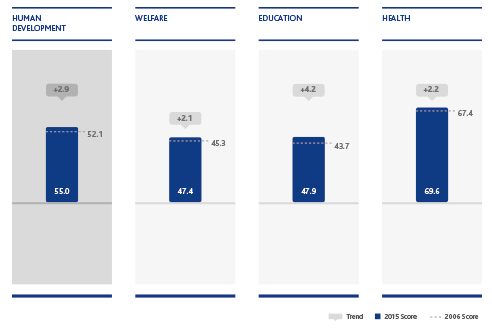 Africa is not a country: what are the key findings at the country level?

There are mixed results at country level with some success stories and some large deteriorations. Each country’s results shed light on its unique situation and users of the IIAG can explore each set of results individually. The need to look at individual countries is supported by the fact that top ranked Mauritius scores 79.9 in 2015, almost 70.0 points more than the continent’s weakest governance performer, Somalia, which achieved a score of 10.6. The remaining 52 countries show diverse results and differing trends. Only one country, Togo, has managed to improve in all of the overarching governance dimensions in the IIAG: Overall Governance, the four categories, and 14 sub-categories.

Which countries do the best? 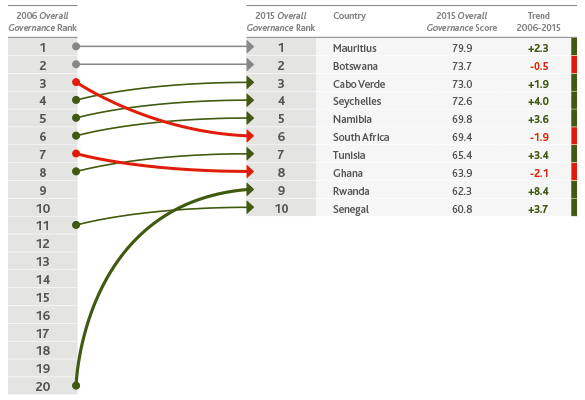 These are just the headlines, there is of course a lot more and the size of the data set means there are many other findings. There are improvements and deteriorations in different measures, there are many different time trend combinations. How, for example, has your country done since the current President came to power? How has a certain indicator improved or deteriorated since a certain policy was put in place in a country?

We encourage you to explore all of the data

We go into more detail for each of the key findings outlined in this blog in our 2016 Index Report. Africa is not a country, and not all of the continent’s countries exhibit the characteristics shown by the continental averages. We encourage you to explore all of the data. It is important to look at what is driving the country scores, the different governance concepts that are being measured, and to look at scores, ranks and trends in conjunction.

The Foundation is fully transparent about the IIAG, so please visit our downloads page to access all of the data, in-depth reports, as well as methodologies and definitions for everything included in the IIAG. Keep an eye on our website as we will release more analysis including country insights over the coming months.

The IIAG is a tool for everyone, whether its government, civil society, academia or business, there’s value in exploring and analysing the results. Most importantly, the IIAG demonstrates that governance is measurable. It is a tool to do just that, and the Foundation hopes that the IIAG will continue to be used to inform and sustain the governance debate.

Trust and Truthfulness: Thoughts on Political Leadership in an Interdependent Age