If half of our population cannot prove who they are, how can they engage and exercise their rights?

Civil Registration and Vital Statistics (CRVS) systems are the means by which countries maintain a continuous and complete record of their population data by documenting vital events in a person’s life such as birth, adoption, legitimation and recognition, death, marriage, divorce, separation or annulment.

CRVS are fundamental for good governance and inclusive development as they establish the legal identity of individuals, providing them with access to public services and securing basic human rights. CRVS are the foundation of modern administrative systems as they enhance the capacity of local and national authorities to deliver social services by identifying what is needed, where and by whom.

The latest African Governance Report titled, Agendas 2063 and 2030: is Africa on track? underscores that well-functioning CRVS systems are key enablers for effective implementation and monitoring of progress towards development frameworks such as these on the continent. For instance, data on real-time cause-of-death information can help to measure many health-related targets of the Sustainable Development Goals (SDGs).

Despite its core importance, CRVS systems in Africa are currently lagging behind. As highlighted in the report, the Coverage of Birth and Death Registration dataset from UNStats shows that of the 42 African countries with data available in the last ten years (2009-2018), only eight have a birth registration system with a coverage rate higher than 90% - Cabo Verde, Congo, Egypt, Gabon, Mauritius, Sao Tomé & Principe, Seychelles & South Africa. The worst performing countries are Chad and Tanzania (12% and 13.3%, respectively). Of the 16 African countries with data on death registration coverage, only three cover 90% or more of the population (Egypt, Mauritius and Seychelles). The worst performing is Niger, with a death coverage rate of only 3.5% in 2018. 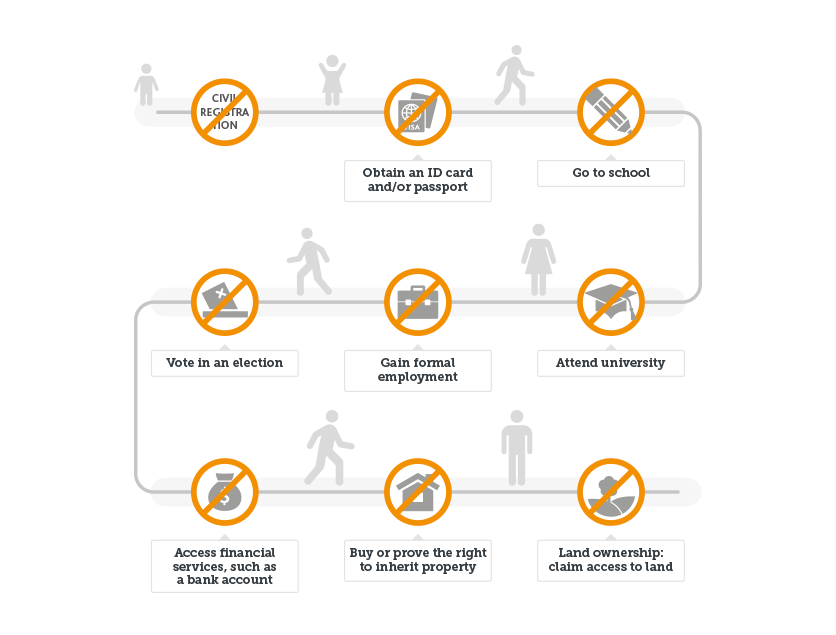 The 2019 Ibrahim Forum Report also highlights the lack of civil registration as one of the main causes of 'statelessness'. As shown in this report, in sub-Saharan Africa, UNHCR reported at least over 715 thousand stateless persons in 2016. According to UNICEF, 41% of sub-Saharan African children under five years of age have never been registered. Children of migrants born abroad are most at risk if they cannot acquire the nationality of their parents’ country of origin and if residing in countries that provide no right to nationality based on birth nor the possibility of naturalisation.

For decades, CRVS progress in Africa has been led by ad hoc exercises mainly delinked from national development frameworks or without policy guidance. Several continental and multilateral initiatives are now addressing these gaps. The Africa Programme on Accelerated Improvement of Civil Registration and Vital Statistics (APAI-CRVS), by the African Development Bank (AfDB), African Union Commission (AUC) and the Economic Commission for Africa (ECA), aims at building a common and consolidated policy and advocacy framework for CRVS initiatives on the continent.

Since 2010, under the APAI-CRVS, the biennial Conference of Ministers Responsible for Civil Registration provided holistic and integrated initiatives to transform and improve CRVS systems in Africa. In 2016, African member states declared 2017-2026 to be the ‘Decade for repositioning CRVS in Africa’s continental, regional and national development agenda’. On 10 August 2019, Africa celebrated its second CRVS Day under the theme, ‘Birth Certificate for All: Fundamental for Protecting Human Rights and Promoting Inclusion’. This annual event is aimed at bridging another gap related to CRVS, namely the general low public awareness of the importance of making everyone visible.

The demand for registration services remains weak because many people do not have adequate awareness about the importance of civil registration for them and their families, and the implications that this has for improving access to core government services.

Instituted in 2014, the World Bank Group’s Identification for Development (ID4D) Initiative recognises the enabling and transformational role of identification systems in achieving several of the SDGs and advancing progress in many areas such as social protection, women and girls empowerment, financial inclusion, governance, healthcare, digital development and humanitarian response.

The ID4D High-Level Advisory Council, has been co-chaired by then World Bank CEO Kristalina Georgieva and UNs Deputy Secretary-General Amina J. Mohammed. Comprised of eminent practitioners and thought leaders from the public and private sector, the Advisory Council provides strategic guidance and amplifies the global narrative of the Initiative and considers emerging trends and challenges, including new technologies, privacy and data protection, migration, and displacement.

Research on Africa: latest publications, May 2020