Upcoming African presidential elections and three reasons why they matter

As highlighted in our 2017 Forum Report, Africa at a Tipping Point, The Gambia’s case is not an unprecedented event on the continent. Over the past ten years, 109 presidential elections took place in Africa resulting in 44 changes of power. Last year alone, out of 15 elections held, eight led to a change of power.

This year, there will be fewer presidential elections in comparison to 2016. Nevertheless, as citizens from countries including Angola, Democratic Republic of Congo, Kenya, Liberia and Rwanda prepare to go to the polls in 2017, there are many reasons why we should continue to keep an eye on the upcoming elections.

From 2006 to 2016, there has been a mixed picture on presidential term limits and constitutional changes, with 17 leaders remaining in office. However, with the presidential elections in Angola and Rwanda, where both presidents have been in power over 15 years, there is a possibility of a political transition similar to the one experienced in The Gambia. If this change occurs, it will be well received by many African citizens, as according to Afrobarometer, in 34 African countries, about three-quarters of citizens are in favour of limiting presidential mandates to two terms.

There are elections, but where is the youth?

Between 2015 and 2050, Africa’s youth population will almost double, growing from 230 to 452 million. Africa’s youth is on the rise and so are the concerns on how many of them are in fact politically engaged and able to shape the political narrative of their countries. As pointed out in the Forum Report, the generation gap between the African youth and their Head of State is wide.

In 2016, the average median age of the African population is about 20 years old while the average age of the Heads of State is 66 years. There has also been a decline on youth civic engagement over the past ten years. Consequently, empowering the African youth to take a stronger role in the political arena should be on the agenda of the upcoming elections. 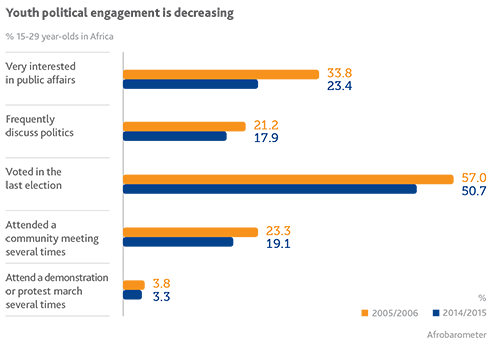 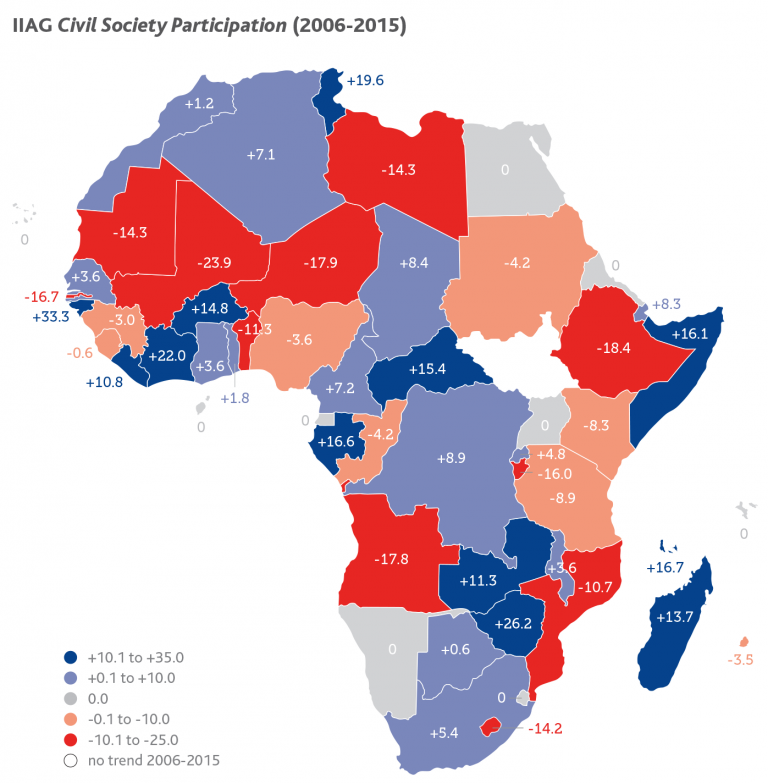 Civil Society Organisations (CSO) play a crucial role by holding their governments to account and driving social, political and economic change. However, as we approach an electoral period, it becomes unclear if CSOs have been able to play this role freely. The new indicator on Civil Society Participation added in the 2016 Ibrahim Index of African Governance (IIAG) captured a marginal improvement (+0.5), on average at the continental level since 2006.

Nevertheless, Angola is among the worst performers and Kenya registered the largest deterioration in Freedom of Expression (-16.5). Therefore, the ability of CSOs to thrive through these challenges is a determinant factor during this electoral period.

Regardless of the outcomes of the upcoming African presidential elections, 2017 will continue to be an interesting political year for the continent. These elections are also a great reminder that it takes more than simply holding an election day to address the challenges and harness the opportunities posed by African citizens.

Democracy is not just about one day every four or five years when elections are held, but a system of government that respects the separation of powers, fundamental freedoms like the freedom of thought, religion, expression, association and assembly and the rule of law.

Use pandemic response to build a more self-reliant Africa