The 2017 IIAG data will be released on 20 November. You will be able to download the Foundation’s report on our homepage and explore all the data for yourself with our interactive Data Portal.

The 1948 Universal Declaration of Human Rights laid the foundation for a rich body of legally binding international human rights instruments ensuring the protection and the promotion of human rights and fundamental freedoms as inherent to all human beings, inalienable and equally applicable to everyone. This framework settles one of the cornerstone of governance, defined by the Mo Ibrahim Foundation as the provision of the political, social and economic public goods and services that every citizen has the right to expect from his or her state, and that a state has the responsibility to deliver to its citizens.

Recognising the importance of tools for assessing the implementation of human rights instruments, the Ibrahim Index of African Governance (IIAG) measures the ratification and reporting status of the nine core international human rights treaties and two optional protocols for the 54 African countries. The indicator Human Rights Conventions is one of the two de jure indicators in the IIAG and sits in the Rights sub-category, which is part of the IIAG category measuring the broader issue of Participation & Human Rights. 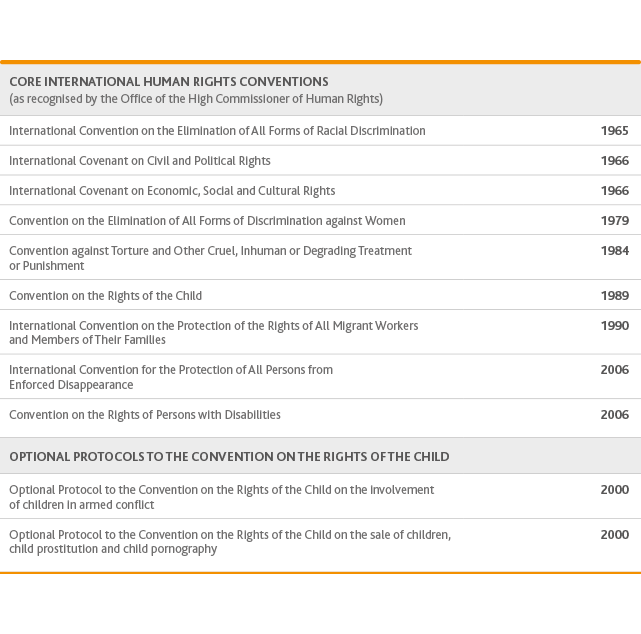 How does the IIAG score countries adherence to human rights instruments?

The indicator is made of two components, which measure in all 54 African countries the status of:

If a country has ratified, acceded or succeeded a treaty, it receives a score of 1.0 from the year of ratification until the end of the time series. The ratification component is then calculated as the total sum of ratifications of the eleven international human rights instruments. The maximum possible score for a country in any given year is 11.0 – one point per instrument.

For example, Algeria ratified the Convention on the Rights of Persons with Disabilities in 2009 so the country’s scores are the following:

The nine core international human rights treaties and the two optional protocols include a reporting requirement to ensure that states parties comply with their treaty obligations. Each instrument requires an initial report to be submitted to the relevant supervisory body within 1-2 years of its entry into force. Following this, states parties are required to submit regular reports on the implementation of treaty obligations.

As reporting obligations vary, a ten-year reporting threshold has been determined. If a country has submitted a State Party Report to the relevant supervisory body, it will receive a score of 1.0 on the year it submitted the report and for the next nine years. On the eleventh year, if the country has still not submitted another report, it will receive a score of 0.0 until a new report is submitted. The component is then calculated as the total sum of ratifications of the eleven instruments. The maximum possible score for a country in any given year is 11.0 – one point per instrument.

Having coded the two components, they are aggregated to form the Human Rights Conventions indicator. Hence, the country score in any given year can range from 0.0 to 22.0, 22.0 being the best score. To allow comparisons between variables and countries, these units must be standardised. The Foundation employs a statistical process called min-max normalisation whereby all raw data are transformed to a scale of 0.0-100.0, explained here.

By obtaining a Human Rights Conventions score for every African country from 2000 to 2016, the Mo Ibrahim Foundation offers an important quantitative measure of the de jure respect for human rights. The 2017 continental and country-level results of Human Rights Conventions will be made available on the 20 November with the online release of the 2017 IIAG. Data will be available at iiag.online.

The Foundation looks forward to the strengthening and expansion of data measuring the whole spectrum of human rights, namely data on the status of the de jure respect for other international and African human rights instruments.

Measuring Free and Fair Executive Elections in the 2017 IIAG