Measurement of government involvement in armed conflict in the 2017 IIAG

While ‘primary parties’ are identified as the parties that have formed incompatibility by stating incompatible positions, at least one of them being the government of a state, ‘secondary parties’ are identified as states that enter a conflict with troops to actively support one of the primary parties. A secondary warring party does not need to meet the 25 battle-related deaths criteria; an active troop participation of their forces is enough. 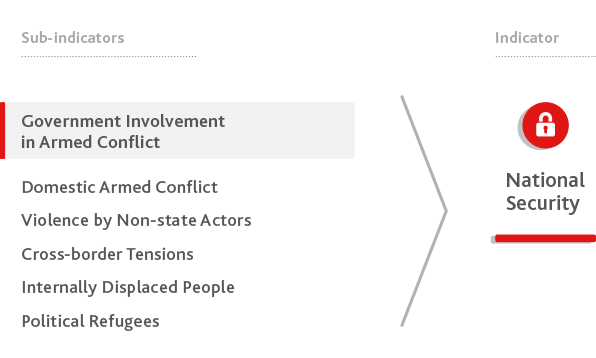 The Uppsala Conflict Data Program (UCDP) is a data project from the Department of Peace and Conflict Research at the Uppsala University in Sweden. With a history of almost 40 years, it constitutes the world’s main provider of data on organised violence and the oldest ongoing data collection project for civil war. UCDP’s definition of armed conflict has been at the forefront of the global standard on how conflicts are systematically defined and studied. In this sense, an armed conflict is understood as a contested incompatibility that concerns government and/or territory where the use of armed force between two parties results in at least 25 battle-related deaths a year. At least one of the two warring parties is the government of a state.

How do we code this indicator?

After the scores for both components of this indicator for each country in each year are added, all the raw data scores are normalised to allow meaningful comparisons between variables and countries. The Foundation employs a statistical method called min-max normalisation whereby all raw data scores are transformed to a scale of 0.0-100.0. See our previous post for a more detailed explanation of the  min-max normalisation process.

The 2017 IIAG dataset will span 17 years and, for the first time, contain scores for 100 indicators, including Government Involvement in Armed Conflict. To learn more about the continental averages as well as country-level scores, access iiag.online for the global online launch of the 2017 IIAG results on 20 November.